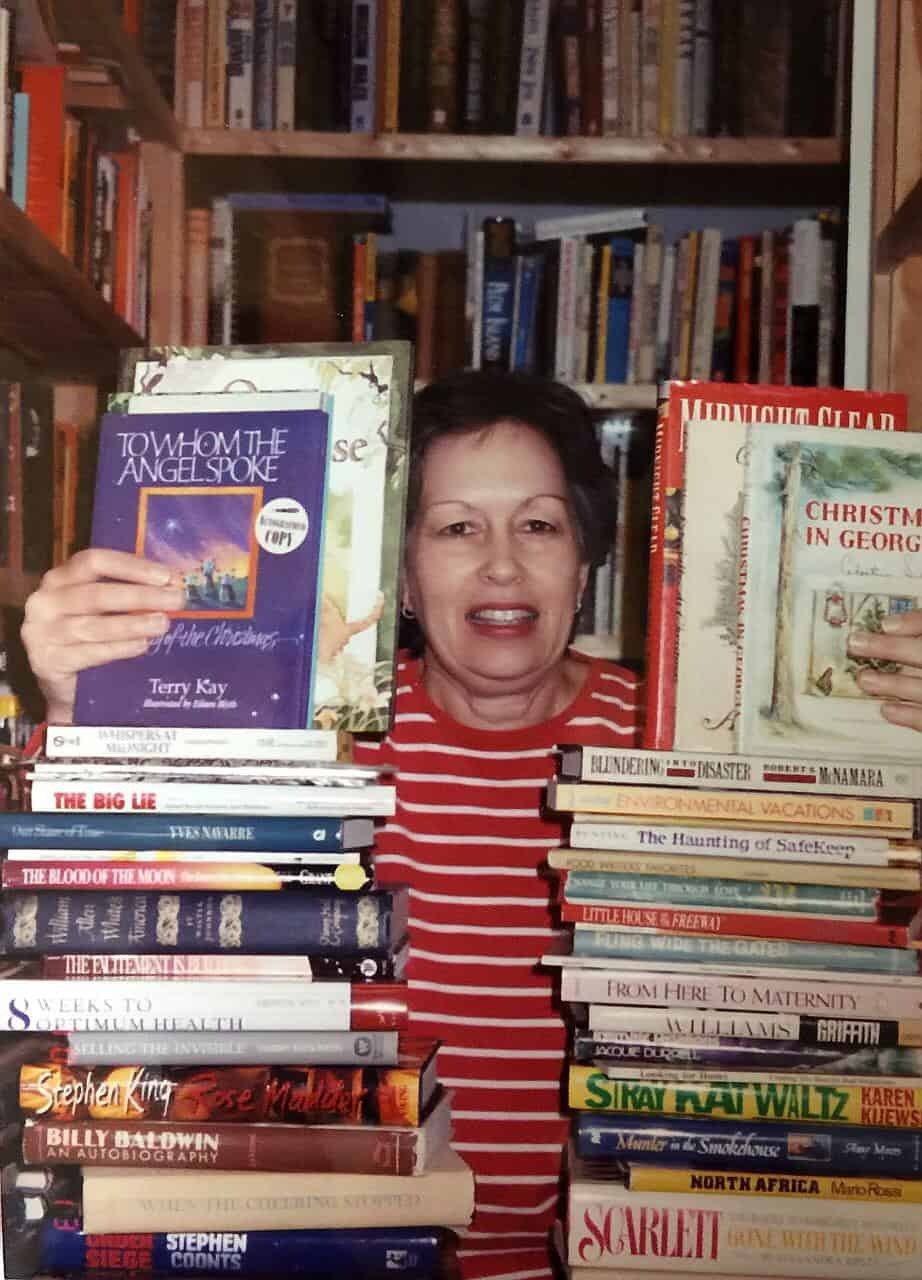 “I have endeavored in this Ghostly little ABE bookseller’s profile, to raise the Ghost of a writer turned bookseller, which shall not put my readers out of humor with themselves, with each other, with the season, or with me. May it haunt their houses (and bookshops) pleasantly, and not one wish to lay it.”

Their faithful Friend and Servant,

(Paraphrased from A CHRISTMAS CAROL by Charles Dickens)

My favorite childhood memories are of days spent reading classics such as Charles Dickens’ A Christmas Carol and Truman Capote’s A Christmas Memory. Books were my beloved friends, welcome sanctuaries, secret windows into the minds of the world’s most creative thinkers.

Books took on an even richer meaning the day I met our new Methodist pastor, Dan Maxey. In addition to preaching, Dan was an avid book collector and had moonlighted in the antiquarian book business for over 20 years. Being a preacher, his sentences were punctuated by words like “amen,” and “let us pray.” But he also spoke of First Editions, author’s signatures, leather bindings and such.

I wasn’t converted to the bookseller’s trade overnight, but after Dan’s arrival, I began to think of books as potential products as well as wonderful reading adventures. Gradually, I collected more books. Was it a First Edition or a book club? Was it price-clipped? Was there a previous owner’s name inside? Book details I had never cared about before became important to me.

One day I told a friend, Athens, Georgia writer Augusta Trobaugh (Praise Jerusalem and Resting in The Bosom of the Lamb) that I was looking for another part-time job to supplement my income as a freelance writer.

“You’re always on the computer. Why don’t you find something to do online? Something that pays,” she suggested.

I had already located several writing assignments via the Internet for publications such as The Chicago Tribune and The Roswell (New Mexico) Literary Review. A steadier source of online income was my goal. I owned a computer and had books to spare. Was an online book selling business for me?

I decided to take a look at book selling sites on the Internet. There were only a few such sites in 1998. After touring them all, I quickly decided that The Advanced Book Exchange was the most user friendly. With free software and bookseller’s websites, they seemed to offer the most opportunity. They even advised visitors to their site to “have fun.” Definitely my kind of place.

Since my business would be an online venture rather than a bricks and mortar store, I needed a memorable name. For some unknown reason, a childhood nickname came to mind: Junebug. That’s the name my aunt Judith had given me on a long ago summer afternoon as we played in the yard, catching junebugs and tying strings to their legs so we could fly them round and round like mini insect airplanes. (Don’t worry, those junebugs all escaped unharmed.)

Orders didn’t pour into my new business right away. But one day, my e-mail produced “THE FIRST ORDER,” an exciting event because I wasn’t totally convinced until that moment that anyone would order a book from me online.

Since then, I’ve never looked back. From its humble 200-book beginning, my business has grown to about 2,400 books online (and eventually 15,000) plus many more sold on auction sites like eBay, and the uncataloged masses, waiting to join their peers in the cyberspace world of e-commerce. Along the way, I’ve learned a lot more about computers, HTML, websites, databases and scanning than I ever wanted to know.

Though I’m no expert, I’ve also learned a great deal about the book business and how to be an online bookseller. Some people think that because you sell online you are getting rich. For small online book dealers like myself, the reality is that making even a miniscule profit is a challenge in today’s competitive world of online book selling. On ABE alone, the number of dealers has risen from 1,800 in 1998, when I joined, to over 7,000 today (over 25,000 or more in 2008).

With all of that competition, why do I keep selling books online? Primarily because I’ve discovered that working with books is the most enjoyable job in the world. I also prefer working out of a home office/warehouse rather than in someone else’s office (been there, done that a few times). I keep selling because this business allows me to use all of the skills and abilities I’ve developed in my past jobs, including freelance writing, bookkeeping and working for the Federal Government for five years before my twins, who are now 21-year-old college students, were born (they’re now 40). Having to constantly learn new computer skills to continuously adapt my business strategies is time consuming. But there also are advantages to working online in today’s new “information age.” Online book selling is a thinking kind of business that keeps your mind as fresh as an updated piece of software or app.

My Specialty and What I Collect

After three years of selling books online, my number one specialty is Georgia authors. That’s also what I collect. The Athens, Georgia area where I was born and still live today is home to the oldest state-chartered university in the United States, The University of Georgia. It also is the birthplace of the musical groups R.E.M. and the B-52s. We have an award-winning literary magazine, The Georgia Review, and two excellent book publishers, The University of Georgia Press and Hill Street Press.

With that kind of atmosphere, it is no wonder that Athens also boasts a rich vein of local literary talent. I’ve read many of these writer’s books more than once. Some of my favorites, in addition to Augusta Trobaugh’s novels, are A Rumor of Bones by Beverly Connor, So Dear to Wicked Men by Takis and Judy Iakovou, The Heart of a Distant Forest by Philip Lee Williams, Dreams of Hummingbirds by (the late) Mary Ann Coleman, To Dance With the White Dog by Terry Kay, Deep Enough for Ivory Bills by (the late) James Kilgo, The Line of the Sun by the late Judith Ortiz Cofer, Our Old House by Susan Vizarugga, Down Home at Miss Dessa’s by Bettye Stroud and The Tree That Owns Itself by Loretta C. Hammer and Gail Karwoski.

Other Junebug favorites include: The Essential Rumi by Coleman Barks, Why Flannery O’Connor Stayed Home by the late Marion Montgomery, Above The Lower Sky by the late Tom Deitz and Creating Fiction by Julie Checkoway. This list is by no means complete.

Most people I’ve met who collect books also collect other things. Whenever I go “book-fishing,” I also look for black cat figurines from the fifties, hammered aluminum and Russel Wright dishes.

Again, Georgia authors win out for this native Georgian reader. Some of my holiday favorites include: Renfroe’s Christmas by the late Robert Burch, To Whom The Angel Spoke: A Story of The First Christmas by Terry Kay, and The Silent Stars Go By: A True Christmas Story by Philip Lee Williams. Also Christmas In Georgia and Especially At Christmas by the late Celestine Sibley. These special books are everlasting gifts that deserve a rereading each holiday season.

Why do I like books by Georgia authors? Simply put: Many of them speak my language with a Southern accent. Like young Renfroe Madison in Robert Burch’s Renfroe’s Christmas, I grew up in rural Georgia “longing for the snow that seldom falls south of Atlanta” to surprise me on Christmas morning. While I enjoy reading books about faraway places and people who live in different circumstances, there is nothing quite like curling up by the fire (on one of those rare cold winter nights in Georgia) and reading a Christmas story of long ago Georgia written by an author such as the late Celestine Sibley.

What I Enjoy About Book Selling

One of the things I enjoy most about the online book selling business is selling long out-of-print books to the authors of those books or their family members. Even though computers were not available to the average person when most of these authors penned their novels and nonfiction books, I imagine that many of these authors are online now, trolling sites such as ABE for their long-lost treasures.

The most unusual book I have ever found during my own treasure hunts was an obscure title by a now-deceased Disney animator. I dug this oversized hardcover out of a box of estate sale books and actually injured my back lifting this book, along with several others. The book sold for almost $500 on eBay. Most of the books I’ve bought and sold over the past three years have been worth much less – in the $10 to $35 range. But making this sale early on convinced me that there was a lot of potential in an online book selling business.

Online customers sometimes ask if I have any employees at Junebug Books. Daughter, Jenny, occasionally helps with packing and shipping. Son Greg, a business major, offers advice on how to improve “the bottom line.” Husband Phillip has been known to shelve books once or twice. But my greatest assistance and moral support as I work in virtual hustle and bustle but actual solitary confinement with my computer comes from my bookstore kitty, Casey, aka Miss Feathertail. Casey just turned up at our doorstep one day a little over a year ago. Now that she has taken over our house and our hearts, she can often be seen supervising or, more likely, sleeping on a bookcase in my office or in one of my red office chairs. (Note: Casey passed away last year, after almost 20 years of Junebug Books management.)

Goals and The Future

For many years as an aspiring author, I had a goal: To publish a book. Now, as an online bookseller, I’ve amended that goal: To publish a book so it can go out of print and become stock for Junebug Books (I’ll even autograph it). (2009 update: I no longer wish for my book to go out of print! 2020 update: My novel, Gone From These Woods, published in Delacorte Press hardback in 2009 by Penguin Random House and in 2011 as a Yearling paperback is now out-of-print in HB and PB but is still in print in digital format.) The writer, who still hides within me like the Ghost of Christmas Past, says, “bah-humbug” — that’s not progress, Donny, (aka Junebug). But the bookseller who has grown over the past three years (Christmas Present) says, yes! That’s the goal. We need more books like Dickens’s. A Christmas Carol and Capote’s A Christmas Memory. But we also need booksellers to sell those books when they go out of print.

As the year 2001 approaches (and now, as I revisit this piece of writing, 2020), I wish you peace and happiness this holiday season. May many good books come your way and may you have the time to read them all.